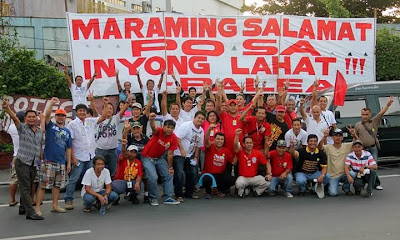 We welcome with great enthusiasm the amicable resolution of the PAL-PALEA labor dispute this afternoon. We congratulate both the new management of the Philippine Airlines (PAL) and the leadership of the Philippine Airlines Employees Association (PALEA) for coming into an agreement that finally settled the country’s biggest labor dispute in recent years.

The labor movement that we represent considers this as one positive news amid the harrowing devastations brought upon us by typhoon Yolanda. It can be recalled that PALEA members were locked out and outsourced at the height of typhoon Pedring on September 27, 2011. Now after Yolanda and with this final agreement, PALEAns are assured of re-employment as regular workers and getting a much improved financial package than what was granted to them by the labor department and the Office of the President (OP). This is sweet victory, indeed.

Yet this is not just a victory for PALEA. This is likewise victory for Nagkaisa!, in fact the first for the coalition’s campaign against precarious work and contractualization. When we embraced PALEA’s call, “Ang laban ng PALEA ay laban ng lahat!”, we thereby considered this struggle as our own. This is victory to all Filipinos who continue to struggle for decent work.

Nagkaisa! regards this victory as an inspiration in pushing further for the enactment of the security of tenure bill, reforms in wage fixing mechanisms, and other agenda that promote the interest and welfare of Filipino workers.