THE NAGKAISA Labor Coalition said it would send out a contract to the presidential candidates to commit themselves to ending contractualization. 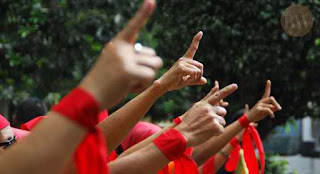 This "single, active contract" to be sent this week will "bind whoever wins rather than the five presidentiables dividing our ranks this coming election," Nagkaisa in a statement on Wednesday said.

The labor coalition is composed of 49 federations and worker organizations, whose leaders joined a press conference yesterday.

The coalition said the candidates' response to the contract would be released after May 1, in an effort to guide the electorate as to how the presidentiables stand on this matter which has become a key campaign issue.

Nagkaisa said if the candidates do not sign the contract, it would persuade people not to vote for them. But if they do sign, the respective positions on contractualization would still be checked if they are realistic.

The contract outlines eight points the next president should agree on: the end of contractualization, wages suitable to a reasonable standard of living, quality public services, reforming the labor compliance system, the poor's right to the city including criminalizing demolitions, realization of full employment by the end of the next president's term, regular political dialogues, and "an office... equivalent to a cabinet rank presidential adviser on labor concerns."

Nagkaisa said it would no longer rely on Congress to pass a security of tenure bill and would instead count on the next president, with his or her authority to issue executive orders.

The group plans to pass two bills, one for the private sector and another for the public. They said the latter is still in the works.

Josua Mata, secretary-general of the Sentro ng mga Nagkakaisa at Progresibong Manggagawa, attributed Nagkaisa's failed dialogue with the Aquino administration to the President's opposition to the security of tenure bill.

"He was claiming that [with] the security of tenure bill, if passed into law, 10 million workers would lose their jobs," Mr. Mata said in a phone interview.

For his part, Alan Tanjusay, spokesperson of Nagkaisa, said in a phone interview, said the coalition does not have the capacity to do the survey ourselves," but estimates there are 25 to 30 million contractuals in the country.

"Naniniwala kami na [We believe that] the government has an official survey on the number of contractual workers in the country pero hindi nila binibigay sa amin, hindi nila shini-share sa amin kasi [but they are not sharing it because] I think the picture is very, very alarming, very grave, or sa tingin namin [or as we see it,] it concerns a national security already," he said.- By Roy Stephen C. Canivel / BusinessWorld Online
at 10:49 AM No comments: