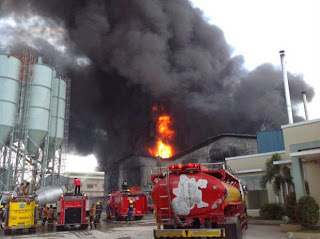 #Justice4KentexWorkers! Justice for the #72workers killed at the Kentex fire!

Partial privatization of labor inspection, weak certification process and the endemic problem of corruption down to the local levels have consigned workers to precarious working conditions, including unnecessary deaths and accidents, the labor coalition Nagkaisa said in a statement.


The statement was issued in reaction to the statements made by the lawyer of Kentex Corp. and the labor department that the company has been compliant with safety standards.

Also this morning, members of Nagkaisa such as the Bukluran ng Manggagawang Pilipino (BMP), Sentro ng Nakakaisang Manggagawa (Sentro), Partido Manggagawa (PM), and the Trade Union Congress of the Philippines (TUCP) offered flowers as an expression of sympathy and solidarity for the dead workers at the Kentex factory in Valenzuela City.

In a protest rally held afterwards, labor groups reiterated their call that aside from compensation, criminal liabilities be exacted among the perpetrators of this terrible crime, including the violation of other labor standards at Kentex.

According to Nagkaisa convenor Josua Mata, the relaxation of labor inspection through “self-assessment” under DOLE’s Department Order No. 57-04 has rendered toothless the supposedly tough safety standards required in workplaces.

The conduct of self-assessment, according to Mata, is voluntary and is based from a labor standard checklist conducted by representatives of employers and workers.

This self-assessment, according to TUCP, is followed by a weaker compliance certification process under the jurisdiction of DOLE’s regional offices.

On his part, Partido Manggagawa (PM) chair Renato Magtubo noted that the DOLE’s “Labor Laws Compliance System” (LLCS) inaugurated in 2013 and the hike in the number of labor inspectors to almost 600 is still not working. An audit by the International Labor Organization in 2009 revealed that with only 193 labor inspectors to inspect 784,000 companies, an establishment gets inspected only once every 16 years.

“Regulatory capture has always been the antidote to strict compliance to regulation in this country,” said De Guzman.
at 1:07 PM No comments:

A coalition of labor groups offered sympathies to the victims of a deadly fire in Valenzuela City as it called on concerned government agencies to conduct a fair, speedy but thorough investigation on this tragedy that caused death and injury to at least 60 workers.

“The high death toll from this inferno strongly indicates a complete breach of safety protocols required for industries. Life certainly matters, but justice for this kind of catastrophe goes beyond legally required compensation. Factory owners and industry regulators must be held criminally-liable for this tragedy,” said Renato Magtubo of Partido Manggagawa (PM), one of Nagkaisa! convenors.

Josua Mata of Sentro ng Nagkakaisang Manggagawa (Sentro) suggested that investigations do not just determine the cause of fire but must dig deeper into why dozens of workers were fatally trapped in the second floor of the factory building.

“The country’s occupational safety and health standards (OSHS) do not only require workplaces to be safe from hazardous and flammable substances but also must be equipped with necessary infrastructures that address emergencies like contamination, fire or explosions,” said Mata.

Initial reports said the fire came from the stock of chemicals in the first floor of the building where a welding work is also being done.

Alan Tanjusay of ALU-TUCP, on his part, said: “this tragedy could have been prevented had government agencies, which include the labor department and local government units, strictly enforced the OSHS requirements in workplaces.”

Leody De Guzman of Bukluran ng Manggagawang Pilipino (BMP) advised the families of victims of Valenzuela fire to organize themselves and press charges against the owners of the footwear company.

The Federation of Free Workers (FFW) likewise called on concerned government agencies to extend the necessary financial and legal assistance to the victims.

The National Confederation of Labor (NCL) believed a substantial number of establishments all over the country are not compliant with occupational health safety standards because of corruption in government agencies.

Meanwhile Annie Geron of PSLINK, a confederation of public sector unions, bewailed the fact that quality public service, which include ensuring the safety of all workers at all times, remains missing or stuck in a state of downgraded priority in the government bureaucracy.
at 2:49 PM No comments:


A big march to Malacanang with simultaneous actions in other cities nationwide marked today’s celebration of Labor Day as workers protested the government’s failure to address their bottom line issues such as jobs and job security, living wage, trade union rights, and decent working and living conditions.

In Manila, thousands of workers from different federations and labor organization comprising the Nagkaisa! coalition marched from Mabuhay Welcome Rotonda to Mendiola under the theme, “Hustisya sa Manggagawa at Sambayanan.”

The cry for justice, according to Nagkaisa!, is labor’s summation of failed engagement with President Aquino, whom the group insisted, “never stood on the side of labor since the PAL dispute in 2011” despite the rhetoric of ‘tuwid na daan’.

“President Aquino should have learned a valuable lesson from his last minute intervention on Mary Jane’s case. That in order to move a quixotic boulder up the mountaintop, a firm decision and solid determination is needed — a resolve he never had in addressing labor problems during the last five years in office,” said Partido Manggagawa (PM) chair Renato Magtubo and one of Nagkaisa! convenors.

The group disclosed earlier that none of labor’s bottom line issues such as contractualization, low wages and power rates reduction have been addressed by Malacanang after four years of dialogues.

“During the last five years we didn’t ask President Aquino to produce miracles. Yet a simple certification of pro-labor measure such as the Security of Tenure bill to regulate contractualization did not even warrant his attention,” said Frank Mero, President of Sentro ng Nagkakaisang Manggagawa (Sentro), another convenor of Nagkaisa!

Labor justice, he added, needs a powerful execution not an endless dialogue.

Another convenor, Annie Geron of the Public Services Labor Confederation (PSLINK), public sector unions are disappointed that the President was not even aware of the fact that the government bureaucracy itself is implementing a widespread and worst kind of contractualization called ‘job orders’.

However, Nagkaisa! conceded that President Aquino has earned credits for saving the life of Mary Jane Veloso. But the group said that won’t change the fact that beyond his buzzer beater intervention on Mary Jane’s behalf, many labor issues that translate into social problems like human trafficking and the exodus of Filipinos to foreign lands persist.

“Filipino are hopelessly enmeshed in an unchanging political system serving the affluent elite and betraying the destitute millions. They sense that no one is fighting for them,” said Gerard Seno, Vice President of Trade Union Congress of the Philippines (TUCP)-Nagkaisa!

“PNoy has resolutely protected controversial allies and lifted no fingers on political dynasties. But never had he shown a grain of disposition for the working class,” said De Guzman.

Other than Manila, labor marches were also held in the cities of Cebu, Iloilo, Bacolod, Davao, General Santos, and in Cavite and Laguna provinces.
at 11:00 AM No comments: