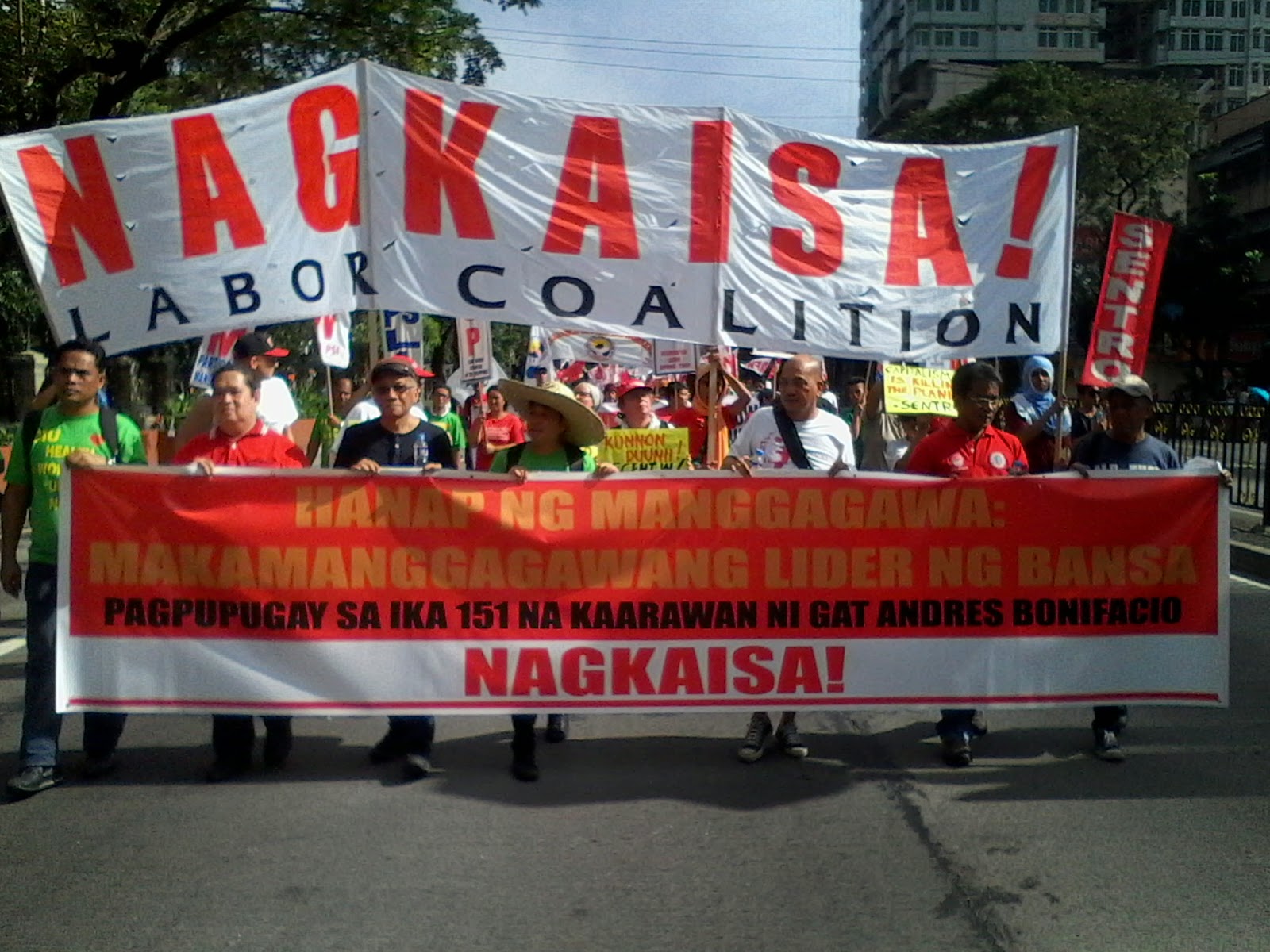 The group is preparing for direct actions next year. At the same time it will craft political strategies for effective electoral intervention come 2016.
at 3:30 PM No comments:

The emerging power crisis is a cruel outcome of a bad policy under the Electric Power Industry Reform Act (EPIRA) that cannot be resolved by the proposed emergency power President Aquino is seeking from Congress, the labor coalition Nagkaisa said in a statement.

The group said it is not common for ordinary workers to comment on techno-economic aspects of the power industry, but for this coming celebration of Bonifacio Day on November 30, labor will come out loud on this along with other big issues because the high cost of power in the country is making the lives of ordinary workers more miserable.

According to Wilson Fortaleza, spokesperson for Partido Manggagawa (PM) and one of the convenors of Nagkaisa, “this quick-fix solution via an emergency power to address a decade-old problems of escalating rates and diminishing supply reignited labor’s apprehension that once again, a power crisis is being transformed into business opportunity for the private sector.”

Fortaleza was referring to the Interruptible Load Program (ILP) and power contracting being pursued through a joint resolution in Congress that would grant the President emergency powers to address the expected power shortage in 2015.

He said the ILP can be pursued by the Department of Energy (DoE) even without the President exercising emergency powers because it is merely a demand-side management issue and not production of additional generating capacity as required under Section 71 of EPIRA.

"Likewise, the foreign and privately-operated National Grid Corporation must first be made to account for its primary responsibility to secure reliable supply, including sufficient reserve capacities," argued Fortaleza.

The group explained that the ILP is a mode for utilizing standby power or embedded generating capacity available in several establishments such as malls and commercial buildings. During shortage, their utilization means an x amount of freed megawatt capacity that can be supplied by Meralco to other users.

Fortaleza, however, said that for this alone an emergency power is not needed. So why is Malacanang asking for it? The group can only think of the following scenarios:

These, in effect, will result to rate increases. But Fortaleza insists that a take-or-pay levy cannot be charged to consumers under ILP since embedded generation sets were designed or were practically built by industry players to address expected and non-expected outages.

“So why do we have to pay them for that temporary sacrifice? And why will Henry Sy, John Gokongwei and Jaime Ayala charge an x amount per kWh from everyone, including non-mall users?”

The group argued further that the only valid excuse for utilizing emergency powers is when the government goes back to generation, stop industry fraud, and makes a decisive shift to renewable energy and energy democracy.
at 12:23 PM No comments: