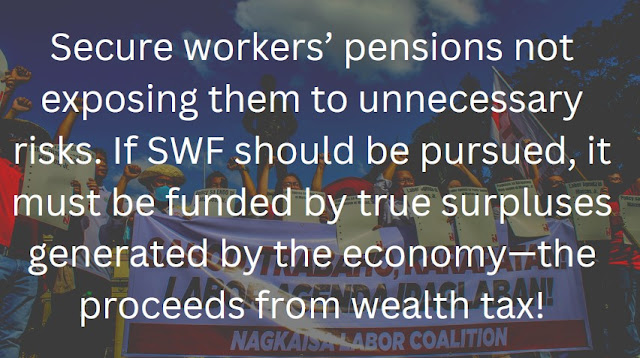 Nagkaisa statement on sovereign wealth fund
Pera naming mga manggagawa yan, bakit kayo ang nag-uusap?
Sovereign Wealth Funds (SWFs) are essentially profit-driven state-owned investment funds. Some of our neighboring countries who want to make the most out of their surplus—usually foreign exchange generated from exports—established state-owned entities to invest their excess capital on various instruments. Singapore, Indonesia, Malaysia, among others, created their own SWFs.
With the potential of SWFs to grow, they can distort incentives in an economy where they are invested enough to favor specific economic activities and enterprises. Although SWFs usually invest in foreign instruments, there is nothing stopping them from pouring investments on profitable economic activities and enterprises at home, thus, making SWFs a strategic tool for industrial policy. But this is not necessarily the motivation for the proposed Maharlika Wealth Fund.
Now, should workers support the government’s attempt to create an SWF?
That public pension funds are identified as sources of financing for the SWF already earns the proposed fund minus points. Public pension funds are fragile. There is a reason both SSS and GSIS are very careful in their investment decisions and that is because that is how they secure future generations of Filipinos. GSIS should know the risks involved especially in foreign money market, after all, their exposure to the 2007-2008 Global Financial Crisis may have costed the pension fund some of its resources.
Can politicians pushing for SWF guarantee the security of workers’ retirement funds while exposing it to potential losses from profit-driven, speculative investment decisions? House representatives who back the SWF argue that pension funds are guaranteed by government funds anyway, and that the SWF will come with sufficient safeguard measures.
But NAGKAISA has a better idea to secure workers’ pensions, and that is by not exposing them to unnecessary risks. If SWF should be pursued, it must be funded by true surpluses generated by the economy—the proceeds from wealth tax!
In 2020, NAGKAISA floated the idea of taxing the unused assets of the wealthiest in the country. The tax revenue from the wealth tax could have funded pandemic recovery measures of the government. Now that the Philippines is gradually recovering, potential revenues from wealth tax can now be used to fund ideas such as SWF without risking workers’ funds.
And what is this obsession about the term “Maharlika”? If the proponents want to connect SWF to a concept from Philippine history, then they should have kept in mind that the Philippine government does not have a good record in managing public funds. That fact is also historical. Unless the proponents have concrete plans about protecting the SWF from turning into a Maharlika Wealth Scam, House Bill 6398 cannot just be allowed to pass. In any case, workers remain critical of this proposal especially when their pensions are on the line. ###
PRESS RELEASE
NAGKAISA Labor Coalition
03 December 2022
at 11:01 AM No comments: