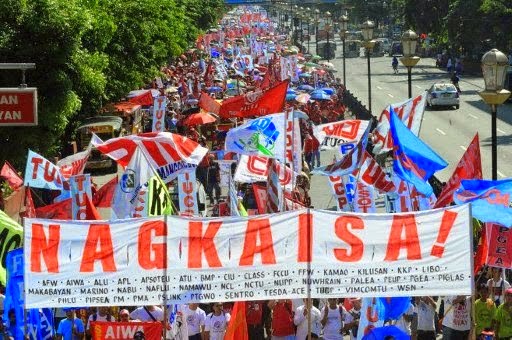 File photo
It is the right of every Filipino to live a life of dignity as well as to quality standard of living. And for this national vision to be realized, the 1987 Constitution directed the State to provide labor full protection and ensure the right of workers and their families to a living wage.Regrettably over the years since the Constitution was ratified, the workers' demand for a family living wage was never addressed as previous governments deviated towards regionalization and the containment of wages to the barest minimum. This deviation consequently created wide gaps in wage levels all over the country as wage fixing mechanism now seeks the lowest level of balance in every region where the market clearing price of labor is primarily determined on the basis of employer's capacity to pay rather than on the worker's right to a living wage. The same problem can be seen in different wage levels in the public sector despite the salary standardization program.As a result, this minimum wage and regionalization policy created the condition of chronic poverty and deepening inequality in the country as millions of workers were consigned to an imposed reality of sustaining their families on wages that can hardly meet even half of the daily cost of living.We, the NAGKAISA, therefore, take as delighting news the planned nationalization of the minimum wage announced recently by Department of Labor and Employment (DOLE) Secretary Silvestre Bello. It is because of our long-standing position that poverty knows no boundary while inequality is the despicable outcome of unfair distribution of national wealth. This deformed policy clearly needs to be rectified, now!However, we always consider as mere government propaganda a major pronouncement that is left without form at the policy level. That, certainly, is what happened to the living wage principle that lay lifeless in the Constitution during the last three decades. But since the new administration has made a pledge to rectify the errors of the previous administrations, stopping the plague of contractualization and realizing the living wage were core issues that NAGKAISA and the government can work together in achieving a common goal.At this particular juncture, the NAGKAISA labor coalition gladly presumes that the Duterte administration remains committed to the principle of living wage and that its planned nationalization of minimum wage will lead towards the ultimate realization of this social objective. Workers, in the first place, deserve not a minimum wage but a fair share in the product of their labor.Hence, in line with the pronouncement of Secretary Bello, the NAGKAISA is looking forward soon to an Order, or something to that effect, going to be issued by Malacanang. We are looking forward to an instruction to all regional wage boards to issue a uniform wage order that is based on Metro Manila rate. And we are, at the same time, looking forward to a Palace-endorsed or certified bill in Congress seeking the same and eventually the repeal of the existing Wage Rationalization Act.The NAGKAISA also strongly believe on the principle of equal pay for equal work and work of equal value not just on private sector workers but for those government employees who are in the same bind. In the same breath, the NAGKAISA call on the government for the uniform application and implementation of Salary Standardization Law to all local government units (LGUs).It is high time to stop the spiral race to the bottom by ending the regionalization and setting of wages to the barest minimum now. The NAGKAISA believes this can be done especially when government will treat the labor movement as main partner to this enormous reform tasks.Therefore, we urge the government to instruct all regional wage boards to issue a uniform wage order the rate of which is based on Metro Manila. We call on government to certify a bill in Congress seeking the same and, eventually, the repeal of the existing Wage Rationalization Act. The NAGKAISA, likewise, call on the government for the uniform application and implementation of Salary Standardization Law to all local government units (LGUs).About NAGKAISAIssue-based NAGKAISA labor coalition is composed of 47 labor federations, workers organizations in public and private sectors and various urban and peasants groups. The group came together in April 2012 to advocate for workers' living wage, promote security of tenure, to lower the cost and ensure reliable supply of power, and for public sector workers to be allowed to form unions and collectively bargain.The members of the NAGKAISA are: Alliance of Free Workers (AFW) , All Filipino Workers Confederation (AFWC), Automobile Industry Workers Alliance (AIWA), Alab Katipunan, Association of Genuine Labor Organizations (AGLO), Associated Labor Unions (ALU), Associated Labor Unions- Association of Professional Supervisory Officers Technical Employees Union (ALU-APSOTEU), ALU-Metal, Associated Labor Unions-Philippine Seafarers'Union (ALU-PSU), ALU-Textile, ALU-Transport, Associated Labor Unions-Visayas Mindanao Confederation of Trade Unions (ALU-VIMCOMTU), Alliance of Progressive Labor (APL), Association of Trade Unions (ATU), Bukluran ng Manggagawang Pilipino (BMP), Confederation of Independent Unions (CIU), Confederation of Labor and Allied Social Services (CLASS), Construction Workers Solidarity (CWS), Federation of Coca-Cola Unions (FCCU), Federation of Free Workers (FFW), Kapisanan ng Maralitang Obrero (KAMAO), Katipunan, Pambansang Kilusan sa Paggawa (KILUSAN), Kapisanan ng mga Kawani sa Koreo sa Pilipinas (KKKP), Labor education and Research Network (LEARN), League of Independent Bank Organizations (LIBO), MARINO, National Association of Broadcast Unions (NABU), National Federation of Labor Unions (NAFLU), National Mines and Allied Workers Union (NAMAWU), National Association of Trade Unions (NATU), National Confederation of Labor (NCL), National Confederation of Transport Union (NCTU), National Union of Portworkers in the Philippines (NUPP), National Union of Workers in Hotel, Restaurant and Allied Industries (NUWHRAIN), Philippine Airlines Employees Association (PALEA), Pepsi Cola Employees Union of the Philippines (PEUP), Philippine Government Employees Association (PGEA), Pinag-isang Tinig at Lakas ng Anakpawis (PIGLAS), Philippine Integrated Industries Labor Union (PILLU), Philippine Independent Public Sector Employees Association (PIPSEA), Partido Manggagawa (PM), Philippine Metalworkers Alliance (PMA), Public Services Labor Independent Confederation (PSLINK), Philippine Transport and General Workers Organization (PTGWO), Trade Union Congress of the Philippines (TUCP), Workers Solidarity Network (WSN).
at 11:57 AM