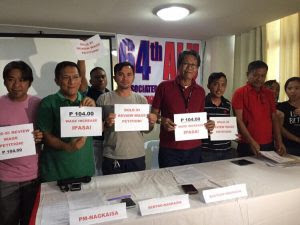 The labor coalition NAGKAISA-Davao cautions workers on the Regional Tripartite Wages and Productivity Board-Region XI’s initiative to review and possibly raise the region’s minimum wage. “As in the past wage orders, the RTWPB-XI’s evaluation is most likely to end up giving loose change to workers,” said Sofriano “Ka Ondo” Mataro, spokesperson of Nagkaisa-Davao and regional head of ALU-TUCP.

TUCP has petitioned the regional wage board for a P104.00 across-the-board increase but the latter said that it has already initiated a motu proprio review of the existing minimum wage in the region in its meeting on January 17, 2018.

“We doubt that the wage review of RTWPB-XI is not prompted by DOLE Secretary Bello, who seems to be working in cahoots with the employers on the issue of contractualization. If not with TUCP’s petition in late March, we would not know that the regional wage board has taken the initiative to take a look at workers’ wages since January”, stated Joel Bañas, spokesperson and Chairperson of SENTRO Davao.

He further explained, “It’s already three months now and no labor group have been consulted and no public hearings were called to discuss the matter. If the regional wage board is talking to some groups, it is not the workers but the employers. Is the right of workers to be heard doesn’t matter nowadays?”

“Agravante said that the wage board has undertaken studies on the region’s economic conditions including the effects of the TRAIN Law, where are the results of these much-vaunted studies? What are its findings?” asks Remy Torres, spokesperson of Partido ng Manggagawa (PM).

Remy Torres is referring to Raymundo Agravante, chairperson of RTWPB-XI and the regional director of the Department of Labor and Employment-Region XI.

“We need to raise workmen’s wages. The P104.00 petition of TUCP is not even enough to recover the lost purchasing power of the regional wage which is P132.70”, asserted Ka Ondo, spokesperson of the group and a convenor of Nagkaisa-Davao.

According to the website of NWPC (National Wages and Productivity Commission), the real value of the region’s minmum wage of P340.00 is a measly P207.30. ” And these figures are as of February 9, 2018. The impact of the excise and value-added taxes under the TRAIN Law is still not factored in”, he added.

The labor coalition alleged that workers are staggering from the effects of the TRAIN Law which inflated prices of basic commodities. The Philippine Statistics Authority confirmed this in an announcement recently that inflation in March 2018 surged to 4.3%.

The law lists ten criteria on which the wage board would base its decision in fixing wages. Among them were the rise in the cost of living, the purchasing power of the peso and workers’ demand for a raise. But Joel Bañas of SENTRO Davao claims, “Since its creation thirty years ago, the regional wage boards has only one consideration on issuing wage orders, which is the employers’ capacity to pay, forsaking the workers’ capacity to buy.”
at 4:00 PM