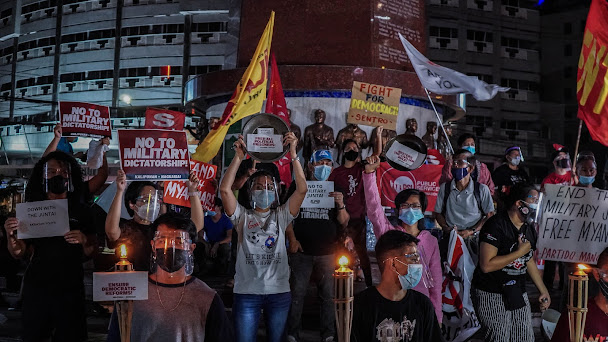 The Nagkaisa Labor coalition stands with the workers and people of Myanmar in calling for an immediate end to the military take over and the speedy restoration of the civilian government. We urge fellow trade unionists and workers in the Philippines, in the region and the rest of the world to do the same.
Any and all attempts by the military to take over the civilian and democratically established governments around the world, much to the detriment of the working people and the citizenry, must be quashed. The people responsible for the military take over and their agents and supporters must be made to account.
Nagkaisa joins the global noise barrage to break the silence across the region. The brazen take over by elements of the military should not be taken sitting down. We cannot be silent as a working class and as a people. We lend our voice and shout with our brothers and sisters from Myanmar as they call for democratic reforms.
Multinational enterprises operating in Myanmar should stop engaging with companies that are owned or are closely associated with the military.
Nagkaisa calls for the release of political detainees and activists, the restoration of democratic institutions, and the guarantees to the human and labour rights of all Myanmar working people, who at this point are exercising their freedom of speech, of expression and to peaceful concerted action against the military takeover.
The right of Myanmar people to choose their leaders and remove limits on freedom of expression, assembly and association should be ensured.
Nagkaisa is also calling for an assurance that workers in enterprises affected by the coup and military take over must be protected.
END THE MILITARY JUNTA!
RESTORE THE CIVILIAN RULE!
ENSURE DEMOCRATIC REFORMS!
Nagkaisa Labor Coalition press statement
Contact: Atty. Sonny Matula, Chairperson, Nagkaisa
sonny_matula@yahoo.com