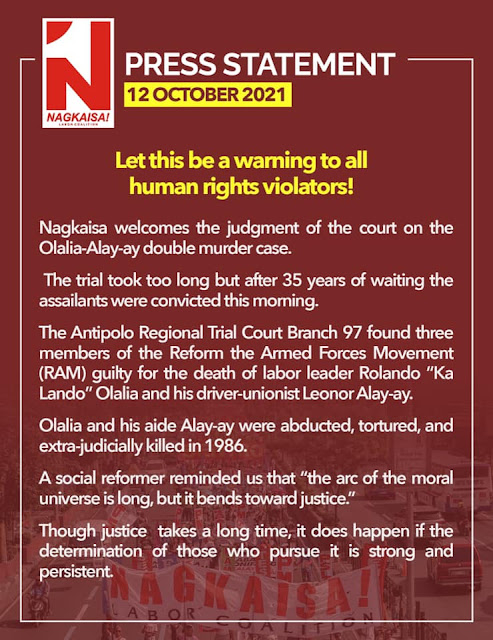 Let this be a warning to all human rights violators!
Nagkaisa welcomes the judgment of the court on the Olalia-Alay-ay double murder case.
The trial took too long but after 35 years of waiting the assailants were convicted this morning.
The Antipolo Regional Trial Court Branch 97 found three members of the Reform the Armed Forces Movement (RAM) guilty for the death of labor leader Rolando “Ka Lando” Olalia and his driver-unionist Leonor Alay-ay.
Olalia and his aide Alay-ay were abducted, tortured, and extra-judicially killed in 1986.
A social reformer reminded us that “the arc of the moral universe is long, but it bends toward justice.”
Though justice  takes a long time, it does happen if the determination of those who pursue it is strong and persistent.
Press Statement
Oct 12, 2021
at 3:00 PM