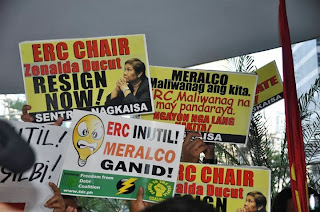 Workers want a full stop, not a mere recalculation of spot market prices which triggered sharp spikes in the December 2013 and January 2014 billing of Meralco.

It is also demanding for the suspension of operations of the electricity spot market.

Groups belonging to the country’s biggest labor coalition Nagkaisa made these calls during a picket held outside the offices of the Energy Regulatory Commission (ERC) this morning, two days after the Commission issued an order voiding the applied rate hike of Meralco.

“It would be pointless to invoke the State’s police powers if the ERC cannot impose a full stop to all rate hike petitions, including that of Meralco and other distribution utilities in Luzon that were affected by ‘market failure’ during the maintenance shutdown of Malampaya gas platform between November and December last year,” declared the group in a statement.

Based on the findings of ERC, WESM prices during that period would not qualify as “reasonable”, “rational”, and “competitive”, thus it ordered the Philippine Electricity Market Corporation (PEMC) to do a recalculation of such prices.

But initially the Commission has already found evidence of market abuse by way of physical and economic withholding of capacities by several plants that led to the tightening of supply during the said period.

Nagkaisa, however, was cautious about a recalculation that may simply result to reduction in rates rather than the full prohibition of the amount applied, which in the case of Meralco totalled P4.15/kWh in December and P5.33/kWh in January.

The group added that any collections made by Meralco reflecting such unjust prices must be refunded to the consumers.

“Let we remind the ERC of the principle that unjust prices resulting from market failure cannot be passed on to or borne by the consumers,” said the group.

Workers had been accusing the ERC of ‘regulatory capture’ during the last 12 of years of EPIRA implementation.  It also played dead on many reports pertaining to market abuse in the spot market.  No wonder it suffered downright condemnation when it approved the Meralco rate hike of P4.15/kWh last December.

According to the group, the ERC is fully aware that the WESM itself is a failure since it began operating in 2006.  By concept it is supposed to be at WESM where we can buy the cheapest electricity since the product is sold here at marginal cost of declared excess capacities of power plants.

In July 2006 the inaugural price at WESM was P2.00/kWh.  During the Malampaya shutdown between November and December last year prices at WESM breached the maximum cap of P62.00/kWh.

“There is no reason therefore to perpetuate this farce,” concluded Nagkaisa.