Support the cause, sign the petition, Justice for Rolando Pango 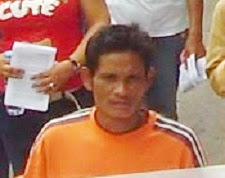 Rolando Pango, a full time organizer with the Partido Manggagawa (PM) was gunned down in Binalbagan town in Negros Occidental on November 29, 2014. Prior to his assassination Pango was organizing sugar plantation workers on Hacienda Salud, which is leased and operated by Manuel Lamata, President of the United Sugar Producers Federation of the Philippines. In June, Hacienda Salud workers applied for land under the Philippines Comprehensive Agrarian Reform Program. They also filed a case against Lamata at the National Labor Relations Commission for illegal dismissal of 41 workers.

"This is a grim reminder that in certain industries and sectors like sugar plantations the Philippines is a dangerous place for trade unionists," said Josua Mata, General Secretary of IUF-affiliated union federation SENTRO and co-convener of NAGKAISA, the broadest coalition of labor groups in the Philippines.

NAGKAISA! is challenging the culture of impunity which effectively sanctions extra-judicial killings and other human rights violations against union members and leaders. The PM and Nagkaisa are calling on the national and local governments to render immediate justice in the Pango case and will be raising his assassination with the Tripartite Industrial Council (TIPC) and the Department of Justice panel investigating the murders of labour activists.