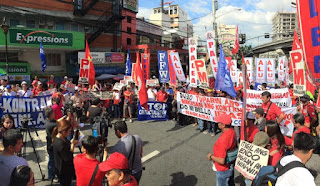 NAGKAISA, including the legitimate TUCP President Raymond Mendoza, a co-convenor of NAGKAISA and the author of HB No.4444 which will prohibit and criminalize contractualization, denounce in clear, categorical terms the underhanded attempt of Mr. Ruben Torres and apparently, DOLE Undersecretary Say, to misrepresent to media after the dialogue with Secretary Bello last Thursday, that a consensus was reached with labor leaders that contractualization is inevitable.That is the very opposite of what legitimate labor federations under NAGKAISA, who constituted 90% of the groups meeting Sec. Bello last Thursday manifested jointly to the Secretary: That we rely on the Presidential promise to end contractualization, and that we look towards an Executive Order to proscribe it in the meantime and towards passage of a Presidentially-certified bill (in the guise of HB No.4444) which will end contractualization).NAGKAISA is shocked and dismayed that news reports of the Worker-DOLE dialogue on how to end and prohibit contractualization are now being presented as a trade union-government lovefest where both sides reached the same conclusion: that contractualization is here to stay.Their action constitutes the highest form of betrayal to workers who only want a fair deal. Ruben Torres' acceptance of the continuation of contractualization for janitors, security guards and salesgirls is craven opportunism of the worst kind, sacrificing the lives of the poorest workers while invoking the name of trade unions for personal advancement. He clearly does not represent the true majority interest of labor.Our true collective position remains firm: that contractualization is oppression of workers' rights which allows employers to avoid giving workers a living wage and to deny them a decent life. This is the very reason that we requested that Sec. Bello work out our request for an audience with the President.Furthermore, the seemingly coordinated statements of former Labor Secretary Ruben Torres, now resurrected and posing as a labor leader of a rump-group TUCP ( the DOLE itself has ruled with finality that his purported federation is not even a part of TUCP, and by that very logic Mr. Torres IS NOT EVEN A MEMBER of TUCP) and apparent partnering of DOLE Undersecretary Say, show the moral depravity that the enemies of workers will stoop to.We will not allow this underhanded misrepresentation of our position to remain uncorrected. Mr. Torres and his co-horts the Eric Gutierrez-backed Roland de la Cruz , last seen, after their gleeful endorsement of the Presidential bid of Mar Roxas, are now trying to make themselves relevant as apologists of the unbridled free-market, labor-flexibilization schemes which the employers prefer as their justification to abuse the Filipino working class.Mr. Torres is no way a part of the legitimate TUCP, nor of the larger workers movement.   Media coverage would have it appear through their interviews that the meeting last Thursday at the DOLE between workers and top DOLE officials led by Secretary Bello was a veritable lovefest. What happened was the DOLE announced that they would have to go to the drawing board to do a new Department Order on contractualization NAGKAISA only reminded the DOLE that what they will craft, and the bill which we should ask be certified, live up to President Duterte's promise: END IT! STOP IT!
at 8:09 PM