Nagkaisa statement on Dialogue with DOLE 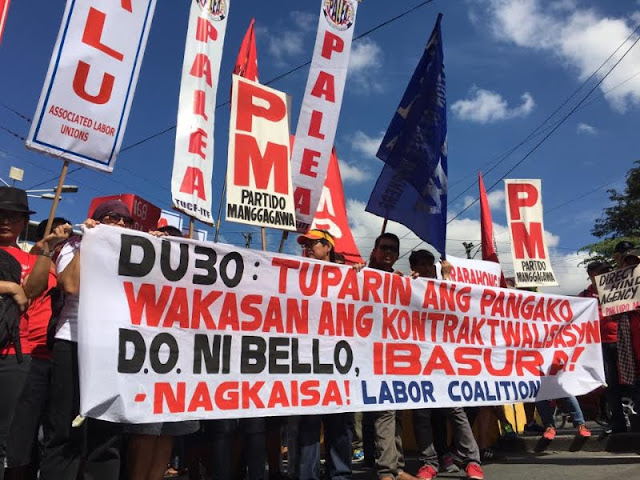 The NAGKAISA labor coalition spoiled the premature celebrations of employers and contractors over reports that a new DOLE Department Order 168 was issued over the New Year which NAGKAISA feels essentially was a product of the proposed "win-win" solution proposed by DTI Secretary Ramon Lopez. NAGKAISA had launched mass actions and an appeal to President Duterte, to signal opposition to draft department  orders circulating which apparently would allow an army of non-regular, contractor deployed "seasonal" & "project" workers to supplant the despised "endo" system of contractualization. President Duterte had made a campaign commitment to end contractualization which he reiterated in his year-end interview with media. NAGKAISA warned that the supposed DO would perpetuate the contractualization policy that the President promised would be stopped Today DOLE senior officials led by Sec. Silvestre Bello announced to the convenors of the NAGKAISA that there is no Department Order. Bello said that he was willing to listen to the workers comments to craft a fresh DO. Bello directed all his Undersecretaries to come out with separate drafts and that this would then be consolidated by the DOLE to a version on January 13, which will be referred to the NATIONAL TRIPARTITE INDUSTRIAL PEACE COUNCIL. This will be subjected to Tripartite consultations and will be issued as DO 1, series of 2017 when approved.NAGKAISA formally requested Sec. Bello to set up an audience with President Duterte where workers will appeal for passage of an Executive Order which will serve as a stop-gap measure to proscribe contractualization until a new law amending the Labor Code is passed. NAGKAISA further requested that the President certify as an urgent Administration measure House Bill no. 4444 "WORKERS BILL STRENGTHENING SECURITY OF TENURE" (Rep. Raymond Mendoza, TUCP Partylist). HB 4444 will prohibit all forms of short term employment contracts and criminalize it.
at 5:15 PM