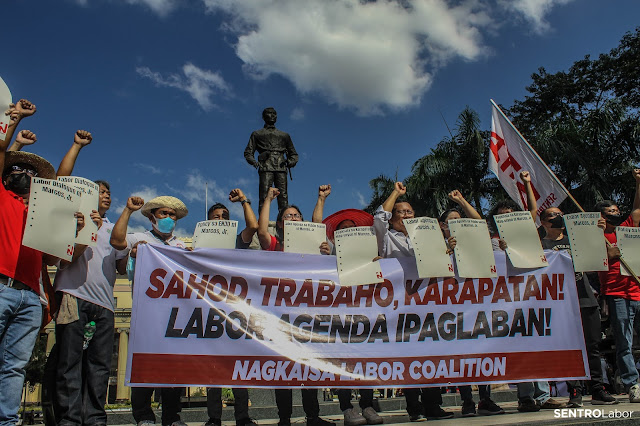 A popular protest symbol against the zero covid policy and censorship in China found its way into the Philippines during the workers’ celebration of Andres Bonifacio’s 159th birthday.
The Nagkaisa Labor Coalition said the ‘Blank Paper’ protest is the Filipino workers’ adaptation of the symbolic protest to press for a Labor Agenda that the group finds sorely lacking in the Marcos administration.
“Bonifacio Day is always a day of protest for Filipino workers, but today is the first time that most of our placards bear no slogans. It is because the blank papers themselves convey the message that a labor agenda remains blank or missing under this new administration,” said Nagkaisa Chairman and Federation of Free Workers President Sonny Matula.
Nagkaisa staged the ‘Blank Paper’ and ‘die-in’ protest at Liwasang Bonifacio before joining the United Labor together with Kilusang Mayo Uno and Bukluran ng Manggagawang Pilipino in a march to Mendiola.
Matula said workers want a Labor Agenda as basis for continuing engagements with the government as the lack of it implies disregard if not outright neglect of labor in the face soaring prices, deteriorating quality of jobs, and chronic unemployment problems, among others.
“Our proposed Labor Agenda embodies the workers’ most urgent concerns as well as reforms in labor policies to decisively address poverty, inequality, and injustice in the country,” stressed Matula.
The Nagkaisa Labor Agenda includes demands for a wage hike, public employment program, labor rights and an end to contractualization, affordable and quality public services, and mechanisms for a continuing policy dialogue on structural reforms.
Reiterating their call for a P100 wage hike, Partido Manggagawa Chair Renato Magtubo, stated: “The amount is merely to recover wages lost to inflation. It’s a relief for a minimum wage that remains at starvation level but still way too far from achieving living wages and improvements in workers’ standard of living as provided under the Constitution.”
On his part, Sentro ng Nagkakaisa at Progresibong Manggagawa (Sentro) Secretary General Josua Mata, attributed the prevailing regime of low wages to the unresolved problems of unemployment and contractualization.
“Contractualization, both in the private and public sector, significantly weakens the exercise of other labor rights such as freedom of association and collective bargaining, thus, keeping the life of ‘endo’ workers to the barest minimum,” explained Mata.
He added that without a robust public employment program in key sectors of the economy, including in climate and environment, the army of unemployed will just continue to crowd the market of cheap labor.
Moreover, inadequacy and high cost of services aggravates this problem, said Public Services Labor Independent Confederation (PSLINK) leader Jillian Roque, who also warned that the Marcos administration’s massive rightsizing plan would only lead to further deterioration of public services.
In protecting labor rights, Nagkaisa demands a solid renunciation of the previous administration’s policy on extra-judicial killings, the scrapping of anti-union laws as well as the abolition of anti-union bodies involved in red-tagging like the NTF-ELCAC and the Joint Industrial Peace and Concern Office (JIPCO).
The coalition is likewise campaigning for the ratification and effective implementation of ILO Convention 190 to protect women from violence and harassment in the workplace.
at 8:00 AM