In solidarity with the union and the more than 11,000 workers of ABS-CBN who are now displaced due to the closure of the giant station, the Nagkaisa Labor Coalition and Kilusang Mayo Uno launched this morning a petition to get signatures to save jobs, uphold press freedom and freedom of expression, and for the grant of a pro-workers franchise. 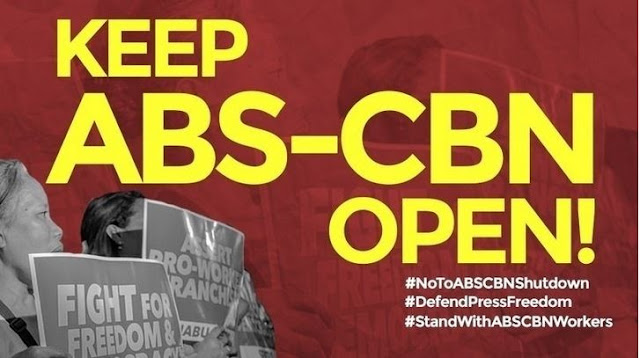 "We condemn the decision of the National Telecommunications Commission (NTC) to shut down the ABS-CBN network. By enticing the NTC to issue a Cease and Desist Order, Solicitor General Calida and the government he represents blatantly affront press freedom and the people’s freedom of expression. The Order also renders more than 11,000 workers jobless, and their families in limbo at a time when we are reeling from the COVID-19 crisis.

"We believe that to deny or extend the franchise of ABS-CBN is within the authority of Congress (Art XII, Sec 11 of the Constitution). What the law itself has granted, the law may take away. But in the case of ABS-CBN, though its franchise has already expired, the deliberation of its renewal is on-going in Congress. NTC have arrogated unto itself the power of Congress. Thus, the unilateral act of "cease and desist" is an abuse of discretion. NTC should have first observed congressional courtesy as Congress is deliberating its franchise renewal.

"The continuous operations of the ABS-CBN is not only good for press freedom and freedom of expression -- one of the hallmarks of a democratic society-- but also good for workers and their families. It means employment for them all. The closure is detrimental to the livelihood of thousands of its employees and other employees of companies directly or indirectly related to the business of said giant media establishment.

"We call on the NTC to reverse its decision, and to let Congress decide on the matter. We call on Congress to extend a pro-worker franchise to ABS-CBN."

Save more than 11,000 workers from joblessness. Fight for freedom of expression! Stop the closure of ABS-CBN!