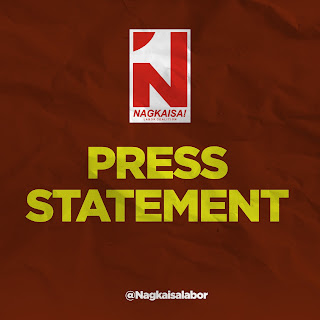 Nagkaisa joins the Kilusang Mayo Uno in denouncing the arrest of two of its officers, Kara Taggaoa and Larry Valbuena, on robbery and direct assault charges filed against them by the Philippine National Police.
Kara Taggaoa is KMU’s International Officer while and Larry Valbuena is the President of Pasiklab Operators and Drivers Association (PASODA). The two were charged of the crime while participating in a public assembly.
While both charges, fishy as they stand, are all bailable offenses, their arrest however sends a chilling message to the whole labor movement as it continues to portray a systematic pattern of trade union repression done in many ways, including the filing of trump up charges against trade union activists that the courts, in recent resolutions on related cases, have judiciously dismissed.
This practice by the PNP at treating legitimate dissent and advocacies as anti-crime operations has no place in the world of work where labor rights are fully guaranteed by the Constitution and international conventions.
The freedom of association and peaceful assembly are grouped together not because they are often intertwined but they are part of freedom of expression.
We demand that the new administration review and reform existing policies on this matter. Police harassment and intimidations on trade unions must be stopped.
PRESS STATEMENT
NAGKAISA Labor Coalition
10 October 2022
at 2:00 PM